“The problem in Libya is that everyone thinks he is right, no one is listening to no one: we got rebels, liberals, Islamic groups… they all think they are right…”

That’s the comment I received from Khalid, a good friend of mine, when I enquired about his whereabouts after the recent clashes in Benghazi and Tripoli.

Not that simple, I think: the problem is rather that none of the said groups is listening to – or caring for – the common people of Libya, it reminds me of an old song by Leonard Cohen, Everybody knows (*), with a rhyme “everybody talking to their pockets, everybody wants a box of chocolates and a long-stem rose”.

Two recent surveys are in my opinion very significant:

The first, “Committed to Democracy and Unity”, funded by the Ministry of Foreign Affairs of Denmark and launched by the NDI (National Democratic Institute) in conjunction with the JMW Consulting firm, is based on three sets (May, September and December 2013) of countrywide interviews of more than 1,200 households selected in a probability-proportional-to-size sampling (based on 2006 census), in all 13 governorates. Questions included topics like current situation, views on democracy, political parties, armed groups, and so on.

The other survey, “Illicit Traffic and Libya’s Transition” , by Mark Shaw and Fiona Mangan of the United States Institute of Peace and supported by the USA Department of State, although based on a much smaller base, tries to analyze the nature of illicit trafficking in the country and the patterns of organized crime, that – together with the activity of the larger “militia” – are critical components of the current security situation.

Some outcome of the polls: 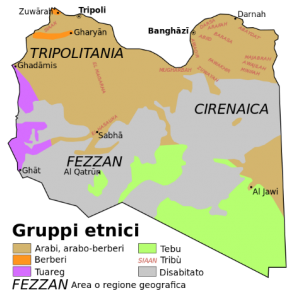 Claims of regional autonomy, believed to move on tribal lines, are clearly opposed by Libyans, significantly including citizens of those regions whose “representatives” were so strongly calling for autonomy.

Libya is a young and urbanized country, with 65% of population below 40 years of age and with 75% of total in urban areas, one can assume that younger generations, like in many other parts of the world

are reluctant to follow the old order (even though the enthusiasm that was palpable on the face of people you could find socializing in the street bars of Tripoli in the summer of 2012 is no more there). 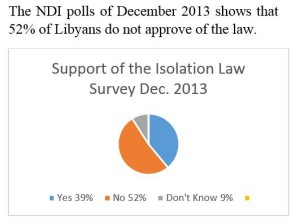 On June 1st, 2013 the Congress passed a law banning anyone holding a political office (including managerial positions with the Administration) during the Gaddafi period – Sept. 1st 1969 to Oct. 23rd 2011 – from holding positions of responsibility for the next 10 years; after few months it appeared evident that the country was deprived by experienced administrators capable of taking the necessary decisions, or as put by Abdullah El Maazi in his article of Nov. 27th, 2013  “The Country is run by apprentices and interns” 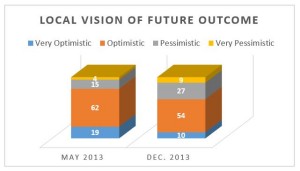 A matter of resources and self-interest, who cares for the ambitions of up to 80% of Libyans?

How many gambling stakeholders? Libya has Africa second largest resource-base of oil and gas (after Nigeria), a very favorable geographic position, an unexplored potential for minerals and a country to be reconstructed, so many prices to get control of, so many players “talking to their pockets”: Rebel Fighters, Militias (approved or unofficial), Muslim Brotherhood, Salafists, Tribal and Ethnic Groups, the Army and the returning Libyans from the Gaddafi period diaspora in Europe, the United States and the Gulf area. 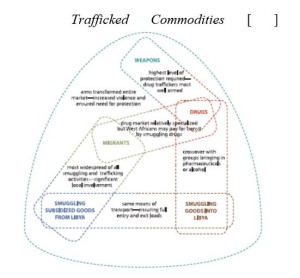 Approved or unofficial militias are keeping the country hostage blockading the production and exportation of oil and gas, down from 1.6 million barrel a day before the revolution to less than 500 thousand (at times less than 160.000), and so starving the administration that is now on the brink of bankruptcy.

Muslim Brotherhood and other Islamic Groups are the best organized and funded.

Minorities like the Tebu and the Amazighs (Berber) feel inadequately represented and tend to boycott national institutions.

Over this, the Army and Police, Gaddafi’s last legacy, are grossly understaffed, undertrained, and underequipped.

More than once, the Libyan government has asked the help of the international community, but very little has been done in spite of all the declarations of good will, and with time the situation has degraded to the extent that the UNHCR is considering setting up a camp in Tunisia for possible Libyan influx, and that the ICRC – International Committee of the Red Cross – is suspending operations following the murder in of their Misrata representative while on a visit to Sirte.

There is even a conflict at Prime Minister level: there is a “caretaker” PM, Mr. Al Thinni, supposed to “take care” of the office until after the new elections of June 25th, and a new, elected with a blitz by the Islamists during a two-third empty General National Congress session, Ahmed Maetig, that claims many Ministries were already handed over to his new government. The case was given to the Supreme Court, which delivered their final ruling of unconstitutionality for Maetig election on June 9th, some reactions are expected.
3. Towards the Elections

1714 candidates (including 152 women) are – as of June 3rd – registered to run for the June 25th Election. By end of registration deadline, Thursday May 29th, registered male voters reached 905,420, registered female voters 603,708, for a total of 1,509,128, or little over 44% of the those with the right to vote (registration remains open until June 15th for Libyans residing abroad, and they can cast their vote June 21-22 at the Libyan Embassy in 13 countries); 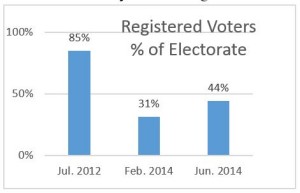 By comparison, for the General Election of 2012, the registered voters were 2,865,937, or more than 85% of the total electorate; while in February 2014, at the election for the Constitutional Assembly, only 31.7% could vote, mainly due to disorders at the polling stations and the boycott of Amazigh and Tebu ethnic groups that felt inadequately represented in the Assembly composition.

Disillusionment is very evident, with the administration that cannot assure security, nor the basic services, let alone a future for the younger generations.

Now enter Gen. Khalifa Haftar (**) with his Operation Dignity: liberals are supporting the military campaign he is conducting with the support of some units of the regular Army, some of the larger militia (and – recently – by the Tebu) as necessary to contrast terrorism, Islamists consider him a new would-be dictator.

Clashes are recurrent between the two factions, wherever supporter and opponents of Khalifa Hafter meet, latest in Tripoli’s Martyrs’ Square when supporters of Hafter’s “Operation Dignity” met supporters of Ahmed Maetig.

The International Community is also split, on one side the P3+3 (USA, UK, France, EU, Germany, Italy), on the other side China, Russia and Turkey, but their action is mainly rhetoric.

In the meantime the vast majority of Libyans, which still believe in Democracy and Pluralism, are left alone.

(**) Khalifa Belqasim Haftar (Ajdabya, circa 1943), was a member of the Free Unionist Officers that participated to the Gaddafi coup of 1969, then member of the Revolutionary Command Council, in 1986 became chief commander of the Libya forces in the Chadian-Libyan conflict. After the disastrous turn-out of the conflict, Haftar was repudiated by Gaddafi and incarcerated for several years. After his release he moved to the USA where he eventually naturalized. Haftar returned in Libya in 2011 to support the revolution, attaining the rank of lieutenant general. From February 2014 he assumed an active role till directing military actions against pro-Islamic militias in Benghazi.