The UN Security Council has passed a resolution authorising “all necessary measures” to protect civilians in Libya from pro-Gaddafi forces. BBC diplomatic correspondent Jonathan Marcus deciphers the precise meaning of the resolution. Key excerpts are set against comment and analysis by our correspondent. 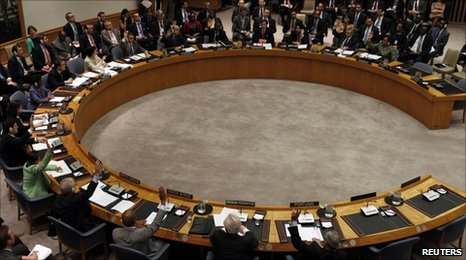 Expressing grave concern at the deteriorating situation, the escalation of violence, and the heavy civilian casualties…

Analysis: These first two highlighted sections emphasise that this is all about defending the civilian population in Libya from attacks by its own government. One of the conditions for action set out by Nato countries has been “a demonstrable need” to intervene.

Analysis: An assertion, as the British Prime Minister David Cameron has just put it, that the international community intends to back its words with action.

Reaffirming its strong commitment to the sovereignty, independence, territorial integrity and national unity of the Libyan Arab Jamahiriya,

Determining that the situation in the Libyan Arab Jamahiriya continues to constitute a threat to international peace and security,

Acting under Chapter VII of the Charter of the United Nations…

Analysis: The first of a number of clauses emphasising that this is not about invading or seeking to divide or dismember Libya. The specific mention of the situation in Libya as “a threat to international peace and security” paves the way for action under Chapter VII of the UN Charter which authorises the use of force.

1. Demands the immediate establishment of a ceasefire and a complete end to violence and all attacks against, and abuses of, civilians;

Analysis: The overriding stated aim is to halt the fighting and to achieve a ceasefire. It does not explicitly call for the removal of Col Muammar Gaddafi though one can assume that this is what the countries promoting this resolution would like. Many of their leaders have said so quite explicitly.

2. Stresses the need to intensify efforts to find a solution to the crisis which responds to the legitimate demands of the Libyan people and notes the decisions of the secretary-general to send his special envoy to Libya and of the Peace and Security Council of the African Union to send its ad hoc High-Level Committee to Libya with the aim of facilitating dialogue to lead to the political reforms necessary to find a peaceful and sustainable solution;

Analysis: This indicates that a final settlement to the crisis in Libya must be political and reached by the parties to the conflict themselves.

4. Authorises member states that have notified the secretary-general, acting nationally or through regional organizations or arrangements, and acting in co-operation with the secretary-general, to take all necessary measures, notwithstanding paragraph 9 of resolution 1970 (2011), to protect civilians and civilian populated areas under threat of attack in the Libyan Arab Jamahiriya, including Benghazi, while excluding a foreign occupation force of any form on any part of Libyan territory, and requests the member states concerned to inform the secretary-general immediately of the measures they take pursuant to the authorization conferred by this paragraph which shall be immediately reported to the Security Council;

Analysis: This is the essential paragraph in the resolution. It “authorises member states to take all necessary means” to protect civilians. This gives wide latitude for operations, for example, against ground units attacking Libyan towns. It specifically mentions the city of Benghazi, the pro-Gaddafi forces objective, and the centre of gravity of the rebel resistance. Crucially it excludes any “foreign occupation force” in sweeping terms. This is a message to the Arab world – this is not another Iraq. This is an operation with a clear limit. Is occupation too specific a term? Might it allow some ground operations like the deployment of Special Forces? There certainly is no appetite for ground operations in any of the countries backing this resolution.

5. Recognises the important role of the League of Arab States in matters relating to the maintenance of international peace and security in the region, and bearing in mind Chapter VIII of the Charter of the United Nations, requests the member states of the League of Arab States to co-operate with other member states in the implementation of paragraph 4;

Analysis: This brings the Arab League states firmly into the fold. This is not just a western action. Indeed the Arab League’s support for a no-fly zone was a crucial factor leading to the adoption of this resolution. Explicitly requests Arab States to be involved in any practical steps that may be involved.

6. Decides to establish a ban on all flights in the airspace of the Libyan Arab Jamahiriya in order to help protect civilians;

Analysis: This is the no-fly ban that has been most discussed ahead of the passage of this resolution. Military experts believe that Col Gaddafi air force is not the decisive element in his armoury – that is his ground forces – but a no-fly zone will clearly constrain and probably halt the use of his fixed wing aircraft. “A ban on all flights” indicates helicopters are included too but these are sometimes harder to control.

authorises member states… to take all necessary measures to enforce compliance with the ban on flights imposed by paragraph 6 above,

Analysis: Again that phrase “to take all necessary measures” meaning that force can be used to impose the no-fly zone.

authorises member states to use all measures commensurate to the specific circumstances to carry out such inspections;

Analysis: This paragraph provides teeth for the enforcement of the existing arms embargo in force against Libya, for example the stopping and inspection of ships on the high seas.